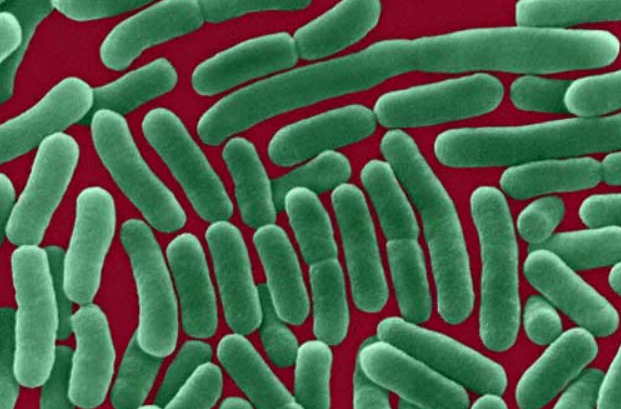 Typhi research by Dr. Andre Hattingh done in Democratic Republic of Congo : Typhoid fever is a type of enteric fever, along with paratyphoid fever. The cause is the bacterium Salmonella Typhi, also known as Salmonella enterica serotype Typhi, growing in the intestines and blood. Typhoid is spread by eating or drinking food or water contaminated with the feces of an infected person.

The purpose of this study was to find out the prevalence and antibiotic sensitivity pattern of Salmonella typhi and paratyphi isolated from children presenting with fever at Hopital du Cinquantenaire de Kisangani in Oriental province Democratic Republic of Congo.

Enteric fever is an important public health problem in many underdeveloped and developing countries1 including Kisangani in the Democratic Republic of Congo. (Democratic Republic of Congo). Though it occurs also in developed countries, the incidence and case fatality rate is very low.3 The global incidence is estimated to be 21 million with 700 000 deaths each year primarily in South east Asia, Africa and Latin America4 attributed to rapid population growth and unplanned urbanization, inadequate and improper waste disposal, lack of potable water supply. Outbreaks are more common in summer season5 affecting mainly children.6 Infected and healthy carriers are the source of infection and “four f’s”          ( food, fingers, flies, and faeces)7  play an important role in the spread of the disease.

Enteric fever is predominantly caused by S.typhi followed by S. Paratyphi A. 6   Though antimicrobial therapy markedly reduces the morbidity and mortality, emergence of resistance to first line antibiotics poses a challenge in its management. 8  Resistance to Chloramphenicol, “gold standard of therapy” since its introduction in 1948,8  appeared in 1970 leading to many outbreaks in Countries in Latin America and Asia.9 It then resulted into multi drug resistance (MDR: resistant to Ampicillin, Cotrimoxazole and Chloramhenical) in 1989.10  Fluoroquinolones were the drug of choice for MDR S.typhi in Asia for the past decade.11  However, emergence of resistance even to these drugs has become a major setback in the management. Moreover, third generation cephalosporin’s used as alternative agents are also becoming less effective.12  However, there are evidence of re-emergence of sensitivity of S. Typhi to Chloramphenicol as reported in Lancet 1999, 353:1241-213 and observed by me at Hopital du Cinquantenaire de Kisangani in Oriental province Democratic Republic of Congo, therefore it is essential to reappraise the antibiotic sensitivity pattern of the isolates periodically.

Enteric fever (Typhoid fever) in Kisangani is more common during the months of February to October. As the disease is most commonly seen in children in our Hospital, this paper reports the prevalence and antibiogram of S. Typhi and paratyphi A and isolates, isolated from mainly children presenting with fever.

A total of 7500 children (neonates and children aged 0 up to 16 years) presenting with fever at Hopital du Cinquantenaire de Kisangani in Kisangani, Oriental province Democratic Republic of Congo in one year period January 2013 to January 2014 were included in this study. Blood samples collected by aseptic venipuncture were subjected to bacteriological culture (1ml of blood was put in 10ml brain heart infusion broth) and incubated at 370 C over night followed by sub-culture on MacConkey agar. Growth negative culture was continued incubation for 5 days sub-culturing in between at intervals of 48, 72 and 96 hours. Growth negative even after 120 hours incubation were regarded as negative. The non-lactose fermenting colonies MacConkey agar resembling Salmonella were subjected for serotyping using polyvalent and monovalent antisera (Denka-Seiken Company LTD Japan). 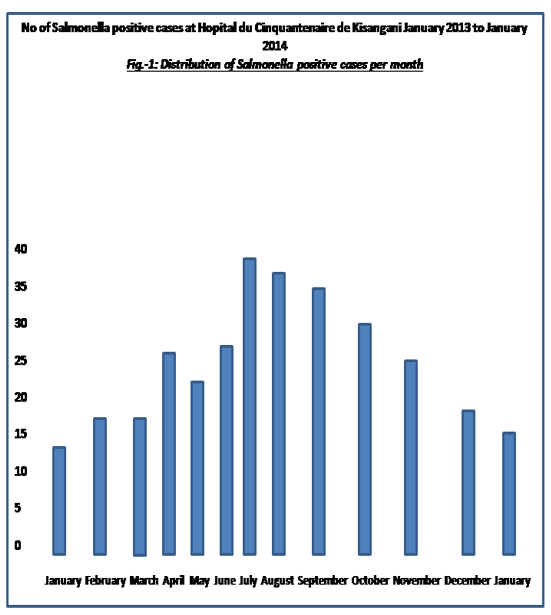 Of the total 7500 blood samples cultured 247 (3.3%) were positive for S.typhi and paratyphi A . Out of the total positive samples 207 (84%) were S.typhi and 40 (16%) S. Paratyphi A. S. Paratyphi B and C were not isolated. The overall growth positive rate was relatively higher in male (53.2%) compared to female (46.8%) children but the difference was not significant statistically (P.0.05) (Table1). Similar trend in growth positivity of S.typhi (M: 55% and F: 45%) was observed in both sexes. Over two third of growth positive cases were seen in age-group of 1-10 years. The occurrence of enteric fever was higher in tropical summer months. (Fig-1) 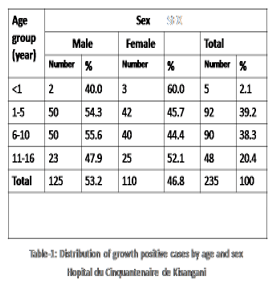 Enteric fever is common in developing countries1  including the Democratic Republic of Congo (Democratic Republic of Congo). It is attributed to rapid population growth and unplanned urbanization, inadequate and improper waste disposal, and lack of potable water supply4 . Emergence of drug resistance in the organism pose a great challenge.15 Physicians, therefore, should always be aware of the antibiotic sensitivity/resistance profile of the organism in a given community16  for the correct and rational use of antibiotics.17

In this study, children aged 1-10 years were mostly effected (over two thirds of the growth positive cases). However, Ansari et al18  have reported two third of the cases to be in the age group 4-9 years. A definate difference in our mean age group at Hopital du Cinquantenaire de Kisangani of 1 to 10 years old. Enteric fever appears to be rare among under one year of age20, five cases (2.1%) were found in this study. Interestingly, S. Typhi was isolated also from a one-month old infant. Reed et al21  also reported similar findings and postulated that the bacteria might have transmitted through vertical route.

Though males had marginally higher incidence, it was not significant (male to female ratio 1.1:1). A slightly different male to female ratio has been reported by Bhattarai et al (1.2:1)14  and Ansari et al (1.3:1)18  The male preponderance seen could be due to their relatively higher outdoor activities exposing them to the source of infection.

This appeared to be due to contamination of drinking water and environment with fecal mater. The open drains next to the streets in Kisangani become flooded by rainwater mixed with bad smelling safety tank overflow and faeces from residents that uses the “bush” as toilets.

The incidence of S.typhi and  S.paratyphi seen in this study was similar to findings reported by Mubeena et al from Pakistan. In the contrary, Mella et al 2 have reported a lower percentage of S. Typi cases from Nepal. This difference could be due to the inclusion of adult and elderly population by them.

S.typhi was most sensitive to Cefotaxime followed by Ceftriaxone, Ofloxacin, Cotrimoxazole and Chloramphenicol in this study. This was in agreement to previous findings 14,18  . However much lower sensitivity (69.1%) has also been reported. 26  A very small percentage (1.1%) of S.typhi was resistant to Ceftriaxone and was in agreement with the findings reported from Pakistan.12,25 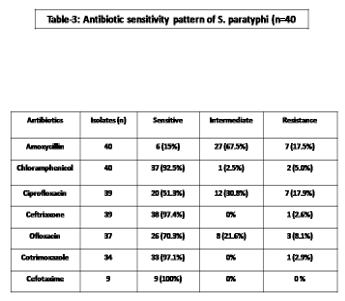 Two-third of S.typhi were sensitive to Amoxicillin. It was similar to the findings of Bhattarai et al14 . On the contrary, Rauniar et al27  observed a higher sensitivity rate to this drug (80%). On the other hand, another study done in India22  showed very low sensitivity (40%).

Although the culture positive rate for S.typhi and S.paratyphi A was only 2.0% of total blood culture samples collected from children presenting with fever, it still indicates the major health importance of this disease in the Oriental province Democratic Republic of Congo. Despite the use of only seven antibiotics for sensitivity testing, these findings help to make known the present status of Enteric fever among children from Kisangani. It is advisable to do sensitivity tests of Cefixime, the recommended drug in the treatment of Enteric fever. Considering the changing drug sensitivity pattern (sensitive to resistance and vice-versa) it is advisable to do continuous evaluation of sensitivity-resistance pattern of isolates as to make rational use of antibiotics in the management of enteric fever cases in future.

genes in clinical isolates of  Salmonella typhi from India. J

Epidemiology of typhoid and paratyphi fever in Kathmandu:

surveillance of  Salmonella serotype typhi infections in the

Outbreak of typhoid in family. Tidsskr nor Leageforen 1993;

ampicillin and other antimicrobial agents: strains isolated in

children who are admitted with urinary tract infections.

Evaluation of nested PCR in diagnosis of typhoid fever.  J

recorded at an university teaching hospital in Kathmandu,

pattern of typhoid fever at a tertiary care teaching hospital in